It was great having family in town during the holidays. Unfortunately, all good things come to an end – people have to get back to work, school etc. Dropping them off at the airport provided an opportunity to test some cargo capacity of Model S 🙂

We knew that it can comfortably sit 5 people. What about their luggage though? My wife suggested that we drive our other car (an aging SUV) instead, but I am stubborn and would not give up that easily. I decided to put Tesla to the test:

As you can see, not only is it a great people carrier, but also offers ample space for the luggage for 5 people. Who needs an SUV!

It feels like the year just barely started and now we have just days left before it is over! I am not sure if this is me aging or a general trend, but it sure seems like time escapes before our eyes faster and faster. Anyway, I thought it was a good time to recollect what 2017 has brought us as far as the electric vehicle market is concerned. There’s no way I can recap all that the world has been working on in this area, but these are the news and events that deserve the mention in my opinion.

There’s no way of course to capture all the exciting and groundbreaking events that took place throughout the year. I am sure I missed some important milestones and I apologize for that. One thing for sure, 2017 deserves the credit for tipping the scale and making everyone (that counts anyway) realize that this is the future and there’s no escape.

The hype is real at last!

I always liked this time of the year. There is something magical about Christmas that no other holiday seems to provide. In the place where I was growing up the snow would be on the ground as soon as early December, so that was the first guarantee of a proper mood as the holidays were approaching. While parents were busy with last minute preparations for Christmas Eve dinner, us kids would be on a watch for a first star to appear on the sky, signaling that it is the time to sit at the dining table. There’s a lot more of great traditions related to celebrating the birth of Jesus Christ and I will probably write about it some other time. One that kids care about the most though are presents! Tesla has a nice surprise in that department as well.

The company has been very systematic with new software updates in the past few months, delivering on the promise of bi-weekly releases. While not every car will receive every release all the time, I can honestly say that I have been receiving at least every other update on average. My last update was 2017.46 and just before Christmas I have received a notification about 2017.50.2 (talking about perfect timing). I’ll cover the  new improvements later, but the one that is simply cool to have during the holidays is the new Easter Egg (or should we call it a “Christmas” egg instead?) that turns your car into Santa’s sleigh and the cars on the road into reindeer. 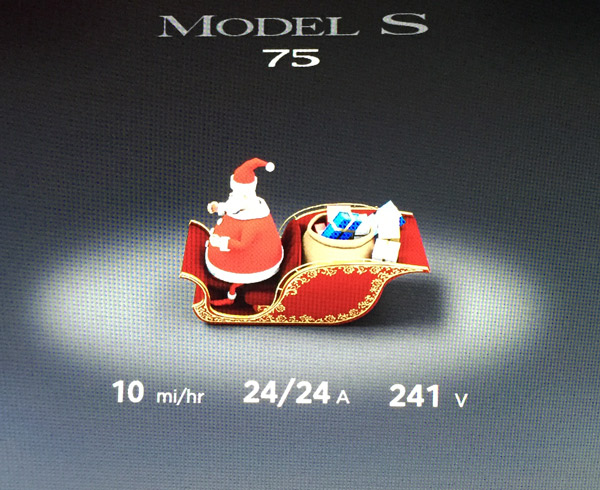 Here’s a quick video I made that showcases how it works:

Definitely something that satisfies the inner child in me!

There’s also a “secret” not-so-funny Easter egg that Elon had hinted in his tweet:

When you get the new Tesla software update, go Ho Ho Ho. There’s an Easter egg inside the Easter egg, but it’s not funny.

Here’s the spoiler for those who didn’t get the clue:

As for the other features included in this update, there’s an additional fix related to Easy Entry. Quoting the release notes:

Neat. the other significant update is going to help those folks living in cold climates to preserve the battery range when plugged in. It requires both the latest version of the Tesla mobile app and the firmware version 2017.50.x (as there were a few revisions of this release). The app notes explain it quite well: 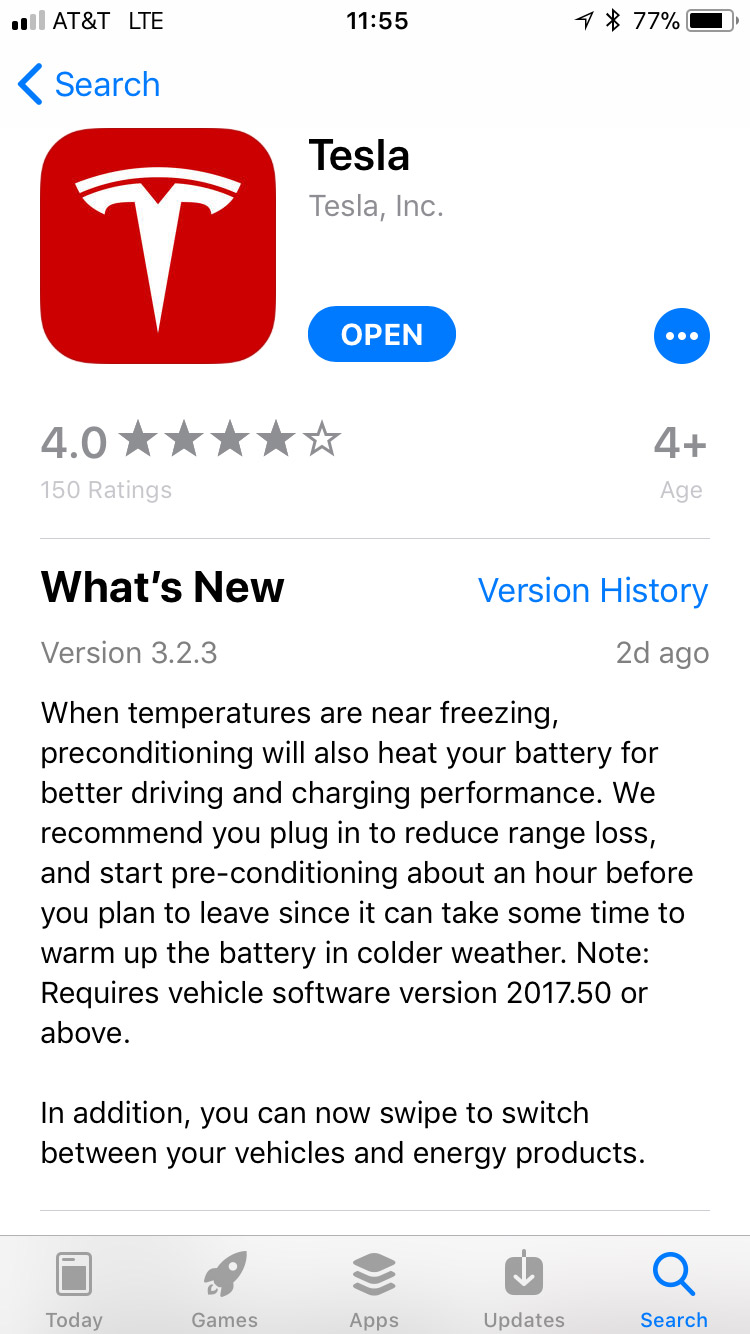 So if you leave your car plugged in the garage overnight (as you should) or in the parking lot at your workplace where you have a charging port (lucky!), you can get your car nice and toasty before leaving and also take care of the battery’s temperature at the same time. Double neat.

I haven’t had a chance to test if there were any other incremental improvements to Autopilot with this update, but if I notice anything I’ll let you know. Meanwhile, wishing you all a Merry Christmas! Spend some time with your family and friends and reflect on things that matter in life the most. Till next time!

On a recent trip to Austin I have spotted this beauty parked at the Supercharger: 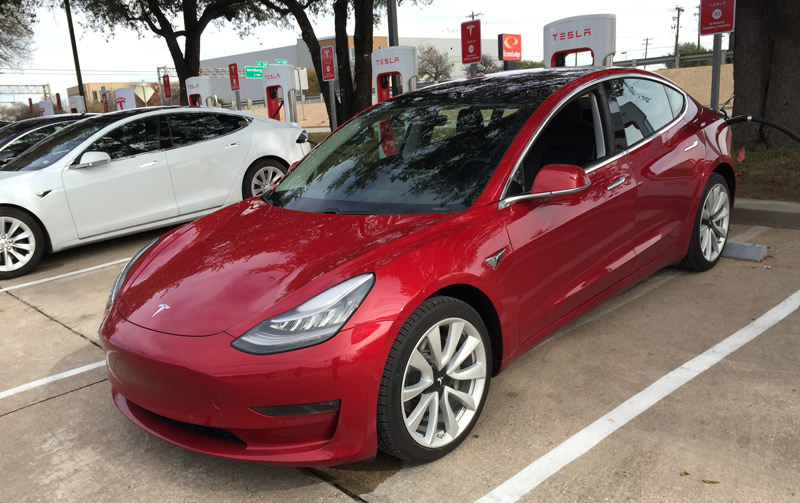 I have asked the owner if I could snap a quick picture and he kindly agreed.

There’s plenty of reports on Model 3 sightings in various places around the country and the “VIN hunters” are as busy as they can get to predict the current production outputs. Everyone is excited to get their hands on one, or even to just get up close with the production model. This was the first in-person encounter for me and all I can say is that it looks even better in person than on a photo. The pictures I’ve seen (including my own shot above) simply don’t do Model 3 any justice. It is truly a well designed car with modern cues and fully deserving its place as a younger (and a bit smaller) sibling to Model S.

I haven’t “bugged” the gentleman that drove this car too much, there’s plenty of coverage of the interior and features out there anyway. I am excited that I could see it for myself and up close though. It is a long range model, by the way.

I hope Tesla has its worst experience behind and the production will continue ramping up, so all the folks that are eagerly waiting to configure and order one can be satisfied. This car is in position to make a true difference on the car market and speed up the EV adoption rate while looking cool and sexy. I cannot wait for the day when Model 3 is as common as Nissan Leaf or Toyota Prius on the road. Hurry up, Tesla. We are all waiting!

There are huge expectations towards what Tesla Autopilot should deliver. They are fueled by numerous bold promises from Elon Musk, as well as early adopters (such as myself) who took a plunge and purchased the car with EAP (Enhanded Autopilot) and FSD (Full Self-Driving) hardware.

Now, I knew that the technology or features were not there yet when I decided to buy into the “promise of the future”. Not everyone has the same patience or expectations though, so there’s a lot of disappointment (anger even) that the Autopilot is not what it was supposed to be by now. I get it. The inner child in us took over when we took the first bite of the full self-driving promise candy and it might have left some bitter taste afterwards. There was so much hype about autonomous vehicles and how soon they can hit the road.

The reality is (putting adult’s hat and skin back on) that no matter the hype, this is not something that can or will be delivered overnight. For what it is worth, I do like the steady but important improvements in software algorithms that drive the features such as Autopilot. Ever since Andrej Karpathy took over an AI team in Tesla there has been a steady stream of software updates to the car fleet. None of them really advertised any features related to EAP or FSD, but the changes are noticeable nonetheless. My car has been updated to version 2017.46 recently and if used as prescribed (aka read the disclaimer before enabling the “beta” of Autopilot) I dare to say it is as close to “silky smooth” as it can be. Before I continue though it is worth pointing out that not every Tesla cars receives every incremental updates. Quite commonly (as reported by Tesla owners) there will be a period of “drought” where the car does not receive every bit of software released and instead there will be a jump (from 2017.3x to 2017.4x, for example). With that said, some of the more noticeable changes I have been observing since 2017.32 include:

Overall, it “feels” as close to natural (human-like) as it gets. Below is a sample video showcasing the behavior during bright daylight, driving mostly into the morning sun:

Another sample of the same road during the night:

I have been using Autopilot on almost daily basis now and it comes very handy. Paired with TACC (Traffic Aware Cruise Control) it helps to eliminate most of the stress related to daily commute. Its behavior is more predictable (most importantly, consistent) with the recent release, so that’s a bonus.

There are still some things that require more work and improvement before it is prime time ready. Few of the glitches that still exist that I should point out:

To sum things up, there’s still a lot of missing gaps that have to be addressed before the Autopilot can truly be used in any condition and on any road. I don’t believe this is something that can (safely!) happen overnight and we will see steady incremental developments leading to self-driving cars. This is why the feature is still available as a beta and as such should be used with a does of caution (RTFM, people). As of now, Autopilot and other driver assistance features are just this: a helper to alleviate some of the pains related to mundane commute and make them less severe. Don’t use them against what they are capable of and keep everyone (including yourself) safe on the road.