Whenever planning our road trips we try to avoid following the same route there and back. It makes for a more interesting journey and allows for seeing more places. This trip was no exception. When the planning and preparations started we were considering a visit to Grand Canyon either on the way to or back from California, but we quickly abandoned that idea. For one, it would add a significant amount of driving to an already lengthy trip. Two, we don’t want to rush things unnecessarily, as you hardly have enough time to see a thing. The Grand Canyon is important of a landmark enough to make it a pivotal point of a trip all by itself. Arizona is not that far from us (we like driving, let’s leave it at that), so why not leave it for our next adventure? The question then: what else should we check out on the way back? I suggested Las Vegas, so my family can experience it at least once in their lifetime, even just to form their own opinion about this place. In order to get there from Lone Pine we would have to drive through Death Valley first.

While driving along Highway 190 you only scratch the surface of this land. I was immediately captivated by its beauty. Many people would quickly associate Death Valley with desolate, flat sands, but there’s so much more to it. Yes, there are sand dunes here as well, but so is Rainbow Canyon (shaped in part by rare – at least in these parts – volcanic activity in the past) and Hells Gate. Each specific area has its unique landscape, but they all have one thing in common: it is really quiet out there. So quiet that one can almost hear their own heartbeat at times. OK, maybe I exaggerate a bit, but not by much. The air was very still during our visit, not even a breeze. There were hardly any cars passing by. The complete quietness that surrounds you can only be compared to an acoustic chamber that I experienced many years ago (part of a mandatory hearing test when applying for a job at manufacturing facility). The major difference: if not for the road that led us here I was surrounded by a vast terrain that seem to stretch all the way to the horizon, no matter which direction I turned my head. In some spots that view was only interrupted by a mountain range or a canyon, but the feeling of being there, in the middle of nowhere, with no other living soul as far as eye can see was something I haven’t experienced for a long time. This is the kind of place to be if one wants to escape civilization, even if just for a while. The place to meditate, heal or whatever our inner call might be. It was special. Magical. Sacred even. 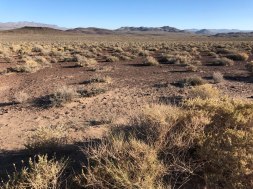 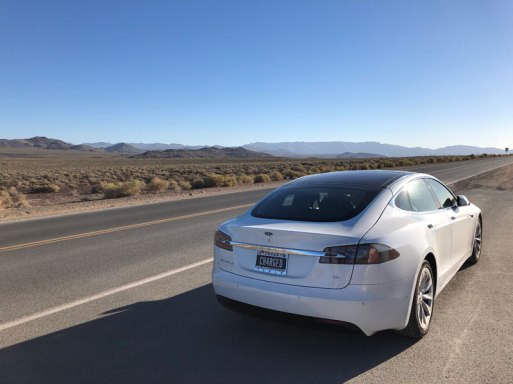 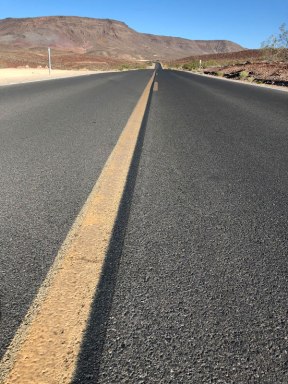 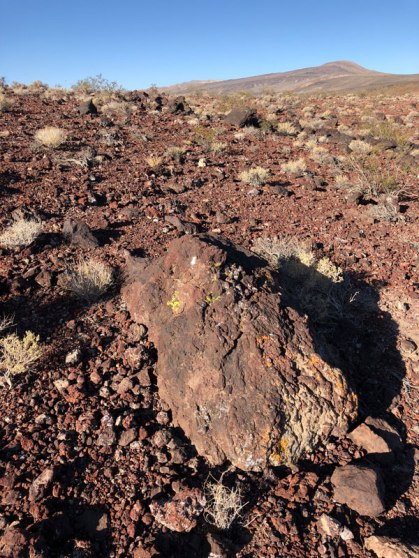 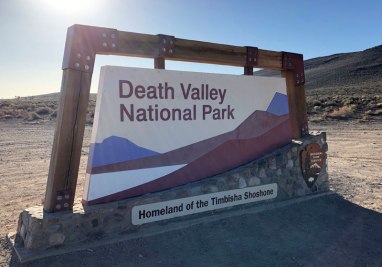 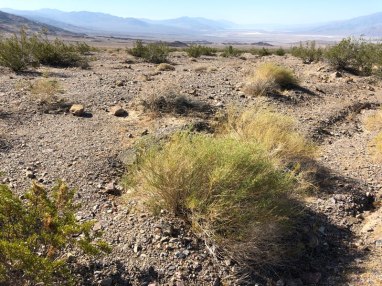 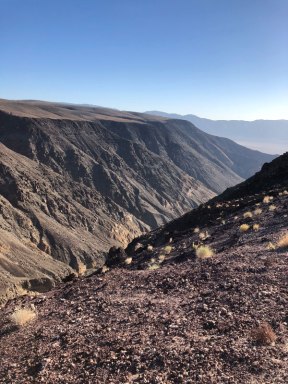 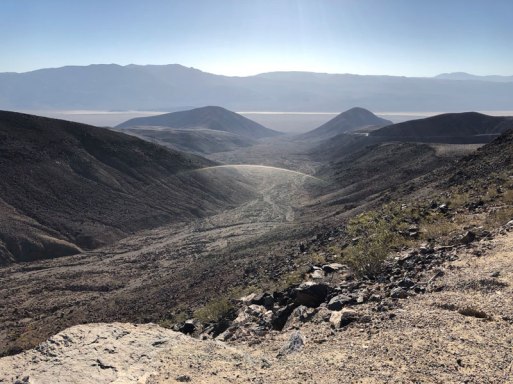 Unfortunately, being creatures of a modern world, we had to get going. We were soon leaving California behind. Shortly after crossing the Nevada state line we stopped at the nearby town of Beatty to charge the car. Despite being a very small place (population of about 1150 according to a recent census) we stepped into one of the best candy stores we’ve even been to: Death Valley Nut & Candy Co. Not something you would expect to find in a remote place. They also have great beef jerky, ice cream and coffee, so something for everyone. 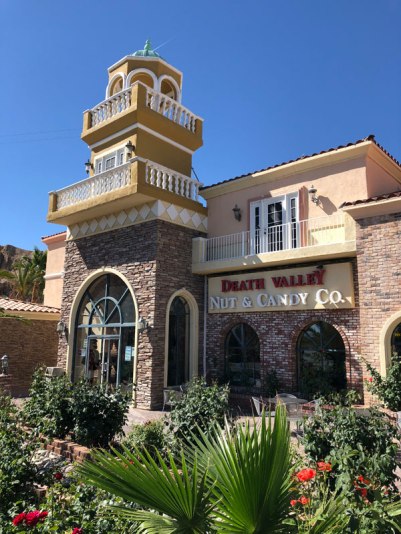 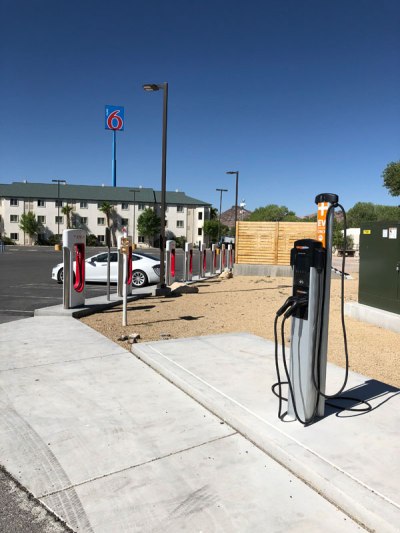 An interesting observation related to the supercharger location was that it also had some standard Level 2 plugs available, making it a universal charging stop, not just reserved for Tesla owners. The L2 charger was a standard ChargePoint’s dual port model, so I am not sure if this has been an initiative of Tesla to invite others to share the space or if the property manager had the necessary foresight. Regardless of which one it was, kudos!

Since there was not much of an itinerary left for the day, we decided to stop by Hoover Dam before entering Las Vegas (the initial plan was to do it the following day in the morning). I know my wife is not that much into admiring engineering marvels, but I really wanted to show it to our daughter.
It’s been several years since I visited the place for the last time and quite a lot has changed. The Hoover Dam Bypass Bridge (or Mike O’Callaghan–Pat Tillman Memorial Bridge) is now complete and operational. There’s also a newly erected visitors center, offering guided tours of the dam. They also added more parking spaces in recent years, as it can quickly get crowded. The drawback is that you need to pay 10 bucks to park, but who would argue about that on a 100-degree day? Due to the latter our visit was rather brief. We were spoiled by now by the moderate temperatures that we were blessed throughout our trip. Even at Death Valley it never exceeded 80 F. So after a few minutes of exposure to the typical Nevada heat, plus the strong gusts of wind resembling a hair dryer, we were D.O.N.E. 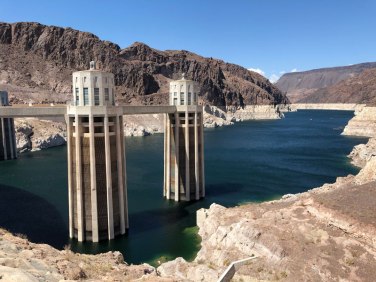 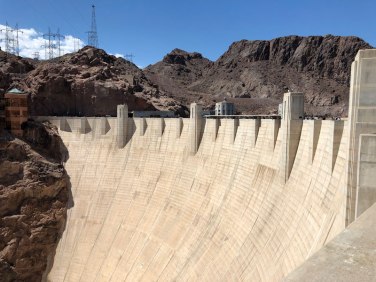 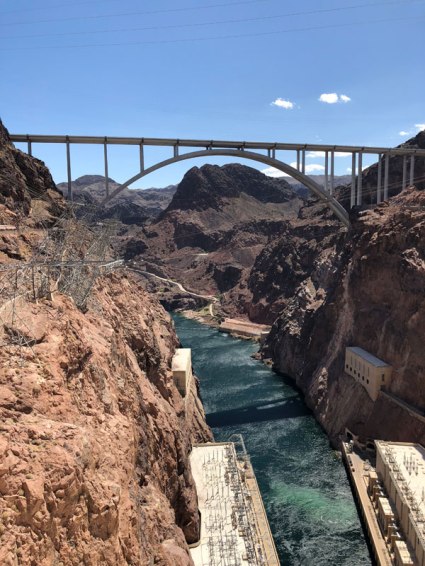 One additional thing I have noticed is the ever shrinking water level of Lake Mead. It is clearly visible on the rocky walls surrounding the lake and it is definitely lower than the last time I was here. The major contributing factor is the population of Las Vegas that just exploded in recent years. Who’s idea was it to build a city in the desert anyway?

Before entering the city we stopped by the famous “Welcome” sign to take a family picture. I have been to Las Vegas many times before, but I have never had a chance to check it out. All my trips are business related and the events are held downtown, so I don’t ever rent a car. This was an opportunity for ticking it off the list finally. 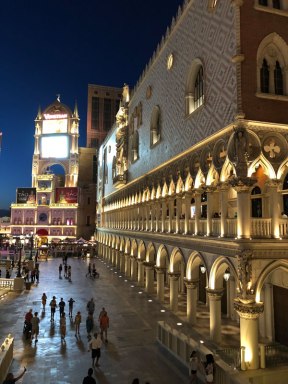 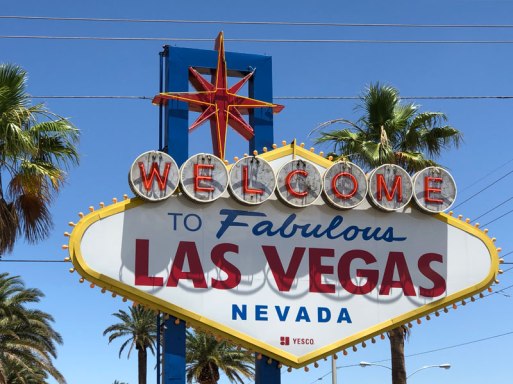 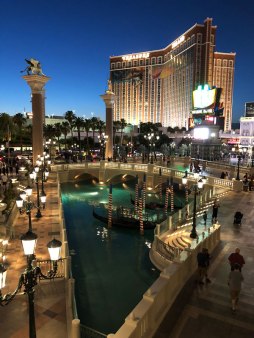 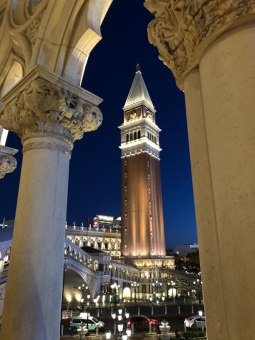 We haven’t done much while in Vegas (not that we have planned to). I brought my girls for a walk along the strip in the evening, so they can experience it when it all lights up. Between the skimpily dressed girls inviting guys to strip clubs, people pestering you with business cards offering similar services, the ever present stench of pot and rather interesting crowds that the city attracts I really don’t think Las Vegas is as family friendly as the advertisements try to sell it. Neither my wife nor daughter were really appreciative of any of that. I wasn’t either, but I guess I was used to it after years of visiting. I regretted for dragging them into this though. On a positive side, that one is off the list now as well. Enough on the Vegas subject. Tomorrow’s another day of adventure!