If we were to leave Legoland and head to our final destination for the day, it wouldn’t be much of a trip (Anaheim is only about an hour away). No worries, we had a plan! 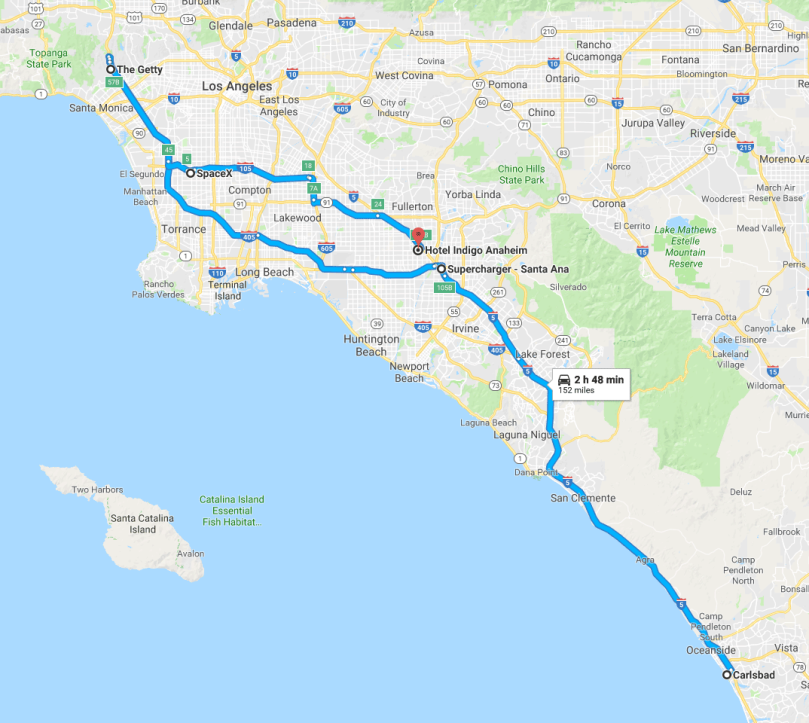 While we don’t necessarily qualify as art connoisseurs, we definitely have an appreciation for fine art. Being in proximity we couldn’t have passed the opportunity not to visit the famous Getty Museum in Los Angeles. We couldn’t care less about the typical tourist attractions that LA has to offer, so we had the luxury of spending as much time as we wanted checking out various exhibits at the museum – and it didn’t disappoint. The place itself, planted firmly on a hill, is a a great escape from the city buzz. Beautifully designed and well maintained, it invites you to relax and enjoy some quiet time.We took upon this invite and had a mini-picnic first, devouring the sandwiches we have prepared earlier. Before we entered the gallery, we spent some time exploring the facility and admiring its architecture. We even caught a glimpse of the downtown from up the hill.

Jean Paul Getty spent most of his life collecting art and many of the fine samples are on display. Our family has developed a taste for impressionism over all other art forms (thanks in part to visits to Kimbell Art Museum in Fort Worth and Albertina Museum in Vienna), so we were in for a treat. Famous masterpieces from Monet, Renoir, Degas, Cezanne and others – all under one roof! As if it wasn’t enough, there were a few paintings committed by no other than the famous post-impressionist Vincent Van Gogh.

If we were into any step-counting game, I am sure we would accomplish the daily challenge and then some – our legs definitely demanded a rest after hours of exploration. As the saying goes, the best things in life are free, and so is the case with the Getty Museum – it is admission-free. Yes, you have to pay for the parking if you come by a car, but that’s rather common in any metropolis. If you come by EV though, there are many charging spots to chose from and they are all free of charge.

Tired but content we continued on. The very next experience: rush hour traffic. Thanks to updated Tesla in-car navigation we have avoided hopping on the freeway and instead continued on a parallel street, slowly crawling forward (as opposed to being completely stuck). I would not be surprised if there was a snail or a turtle passing us by at some point. Eventually we managed through. Bucket list item “experience LA traffic” – checked.

Speaking of traffic, there’s a lot of stereotypes floating around. You’ve probably heard of California, New Jersey, New York or Texas driving. While I’d be biased providing my opinion on the latter one, I can debunk at least some of the myths and generalizations related to Californian motorists. In general, people are patient and if you signal they will let you in. Speaking of signaling, everyone seems to wait for at least few seconds before changing the lane – we’ve seen it across the whole state, in case someone will say it is a Southern or Northern part of the state thing. Seems excessive, but it works. I do like the traffic lights at the on-ramps – one car at a time (more if there are parallel lanes) helps to keep the flow of traffic while allowing others to merge. I also like the flashing yellow light when approaching a stop (especially around the bend, where you don’t see what’s coming). Overall, I found it rather stress-free to travel across the Golden State. So, go and experience it yourself before you judge or repeat the half-truths you have overheard somewhere else.

Since we knew that our destination hotel will not provide the charging, we decided to top up in Hawthorne before arriving in Anaheim. Wait a minute… isn’t that where… you betcha! That’s where the SpaceX headquarters are, and so is a Tesla supercharger. Both companies share the space – Tesla Design Studio is right across the wall (or heavy-duty curtain rather) from the rocket factory. Although you are not allowed to take any photos while inside, you can definitely hear the sounds coming from the other side when sitting at Tesla’s lounge: welding, hammering and various power tools – music to the ear of any mechanical engineer.

Miles driven: 156
Teslas spotted along the way: I lost count (or stopped bothering 🙂 )